I have a life long love affair with elephants especially the Giant Tusker Elephant! I think I must have somehow been born with that affliction because I cannot remember when elephants were not my favorite animal. I remember feeding circus elephants peanuts, zoo elephants, Tarzan’s elephants, riding elephants at Busch Gardens, Hatari’s elephants following Momma Tembo, Mancini’s Baby Elephant Walk, collecting elephant figures, and well there is a lot more from there.

In the 1970’s I became aware of the world of a giant tusker elephant that roamed Kenya, the near-mythical Ahmed. Ahmed was easily the most famous elephant of that era. I vividly recall an episode of American Sportsman directed by John Huston and another from George Plimpton, chronicling this giant. Ahmed is probably the first of the famous big tusker elephants to survive poacher attacks and die of old age. He was the poster “giant” if you will that helped spread the word to the world about the massive destruction of the elephants for their ivory. 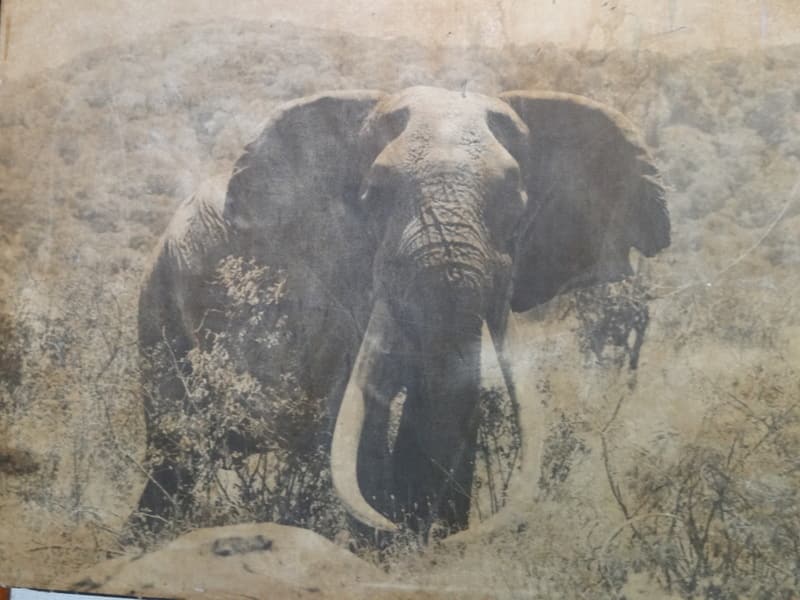 Painter, Paul Bosman’s book, “The Magnificent Seven” introduced me to the 7 biggest tuskers in Kruger Park, and it’s a book I still browse through with great fondness.

I started coming to Africa in the 1990s, and I was always in search of elephants with big ivory, “ground pounders” they were called, and while sometimes I would get a glimpse of a big one, I never found a giant, until Tim!

Of course, I knew Tim existed, and I knew that he was a big boy, but he was also elusive living outside of Amboseli as much as in the park. On our game drive in Amboseli this year, the guides chatter was suddenly more animated than usual, and then they turned to me an asked if I wanted to stop photographing birds because Tim was in the park! I about fainted before I could reply, “kwenda, haracka, HARACKA!” In English, that means “go really fast!”

We finally caught up with his majesty, Tim and even with all my years of wishing and dreaming, I was not prepared for the magical moment, superlatives can’t define how inspiring Tim is as he strides around the park.

I finally found a giant tusker elephant! Not only that, but Tim isn’t just big he is the biggest elephant in Kenya and perhaps all of Africa!

Tim and Amboseli Elephants by the Numbers

Even though Tim is an easy going elephant, he is also a naughty boy when it comes to eating tomatoes from nearby farmlands. He and his family grew up outside of the park boundaries in Kimana, and the lush vegetation is perfect for elephants, but also for farmers. Tim developed a taste for farmed foods, and as he has grown older, he continues to wander out of the park, and it’s protection for his beloved tomatoes.

In 2016 the researchers needed to add more protection for Tim and to curtail his trips to the farmers market in Kimana, and so he was given a GPS collar. The authorities are alert to his location at all times and mobilize security to the farmlands when Tim decides he needs a tomato fix.

In 2014, Tim survived attempted poaching via a poisoned spear attack. A team of rangers found Tim and were able to cure the nasty infection of the spear attack.

Who says an elephant never forgets? In 2016, Tim was again wounded by a spear and a blow to the head by a huge rock hurled by angry farmers. Tim did what every intelligent being would do and took himself to the medical facilities to get himself fixed up!

How Did Tim Get His Dumb Name

In the mid 1970s the first research of the Amboseli elephants was begun. To make things easy for the researchers they named each of the elephant families with a two letter code starting with the letter T, like TA, TB, etc. Then each elephant was given a name that began with the letter T. Thus the son of Trista and grandmother of the indomitable Teresia became, Tim.

Even though Tim is a rather dumb name for an elephant, it does seem to match his laissez-faire attitude and lumbering gate. I think it’s time I stop bemoaning his name and continue to celebrate this fantastic elephant.

Compare these Large Elephants to Tim

Future of the Giant Tusker Elephants

Tim turns 50 in December, and a small army of researchers and guards help to keep and him safe so that he will remain the symbol of the Amboseli Elephants and as even all elephants safe for years to come. There is never enough money or awareness to help save the elephants and the Giant Tusker Elephants n Africa. I trust these organizations for their long-standing tireless work. If you feel like helping you can’t go wrong with Big Life Kenya, Amboseli Elephant Trust, or Sheldrick Wildlife Trust.

I have 3 safaris planned for 2020, two of which are already full, but you can book space with me now, and we’ll do our best to find Tim! I make no promises about what we see on safari, I have been on hundreds of game drives and not one has been the same, it also took me six tries to fulfill my quest to see a Giant Tusker Elephant in Africa. Join me on my Wildlife Photo Safari and I will promise, that You Will Be Amazed!

More blog posts about my safaris!

The Call of Africa always rings loudest as I am preparing for my next safari.

How to Safari – Private Safaris

Photographing wildlife on safari in Africa is amazing, learn how!

Let me tell you about all of the services I provide my safari clients before, during, and after their trip of a lifetime.