Fun Flamingo Facts for far-flung fanatical flamboyant, fabulous flamingo fotographers! Ok, I know that I stretched that alliteration way too far, but I was on a roll!

Flamingos are one of the more stunning birds in the world with that vibrant pink color and long legs. Given their appearance in virtually every zoo and amusement park in the world, the flamingo was most likely the first exotic bird that you knew.

The flamingos’ name comes from Portuguese or Spanish Flamengo, “flame-colored,” in turn coming from the French, Flamenc, “Flame.”

There are six species of flamingos around the world, well seven if you count the lovable yard variety, Flamingo plasticus!

Flamingos spend most of their day feeding on crustaceans in shallow mudflats. The mudflats also provide perfect perilous predator protection. :-)

Flamingo flocks can be several hundred birds, and they are one of the few birds that perform their mating ritual en masse. A sort of Flamingo Flamenco if you will!

Male and Female flamingos work cooperatively to build the family home, incubate the eggs for a month, and feed the chicks.

Flamingos can detect rain from more than 300 miles (500km). Scientists are not quite sure how they can do that but assume they can sense minute changes in barometric pressure.

Flamingos are not just pink on the outside, but pretty much all over. The pigments from their crustacean diet also dye their skin as well as their blood pink. If your social media feed has images of pink flamingo egg yolks, well, the yolk is on you, it’s been photoshopped.

Baby flamingos are grey, and their bill is straight. They don’t have their famous, fabulous fuschia feathers until they are two years old.

The flamingo’s pink feathers also determine the rank of individuals in the flock. Dominant birds will bump up their diet and increase the level of pink feathers which will then promote the beginning of their breeding season.

Flamingos have impressive longevity and have been known to live into their forties. One geriatric flamingo lived to be 70 in a zoo in Australia.

The long wingspan (3-5 ft or 1-3 m) needs some help to get theses birds airborne, so they run several yards pumping their wings as they go.

The stilt-legged birds often rest standing on one leg. Scientists are puzzled if this some way to reduce heat or if it is just more comfortable.

The long fluid kneck of the flamingo is made up of nineteen vertebrae. Compare that to the seven in giraffes!

Flamingos do have ankles, just not where you expect. The ankle is halfway up their legs. 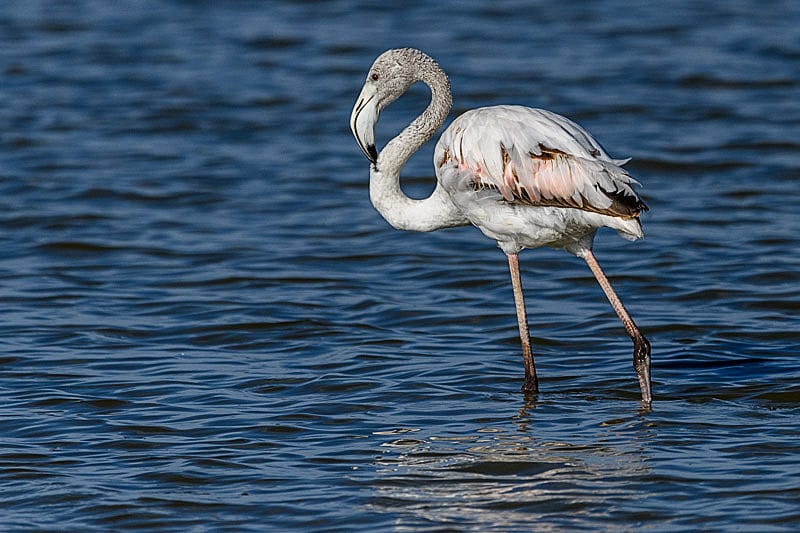 I have two photography workshops where it is possible that we can photograph flamingos. The first is in Provence on my Camargue White Horses Workshop. The second is in Africa on one of my photo safaris in Kenya.

I think flamingos are stunning and I have photographed flamingos all over the world. If you would like to see my work head over to my Flamingo Photography Gallery.

What Fun Facts Do You Know?

Leave me a comment with your fun flamingo facts and I will add them to the list.